Enhancing Protection in Armed Conflict through Domestic Law and Policy

ref. 4322
International humanitarian law (IHL) affords protection to people and property in armed conflict, but only if its rules are properly recognized, clearly understood and fully complied with, when and where they apply. The first vital step in ensuring the effectiveness of the law’s protection is acceptance by States of the relevant instruments through ratification or accession. A number of other actions must also be carried out domestically, beginning in peacetime, to enable compliance with the law. National committees or similar bodies specifically dedicated to IHL can usefully advise and assist governments in fulfilling this complex task. As at end of November 2017, such bodies exist in 111 countries. Between 30 November and 2 December 2016, existing national committees and similar bodies on IHL met for the fourth time at the universal level* to exchange information on their activities, experiences and achievements and discuss practical issues relating to the implementation of IHL at the domestic level. The overarching theme of the meeting, held in Geneva, was Enhancing Protection in Armed Conflict through Domestic Law and Policy. This report provides an overview of discussions at the meeting on the role and work of national IHL committees and similar bodies in general, and on the protection of cultural property, provision of health care and protection of internally displaced persons and migrants in armed conflict specifically. The discussions sought to identify good practice at the domestic level in terms of introducing and implementing laws and policies aimed at generating greater respect for IHL. The report highlights the conclusions drawn from these discussions, including elements that were identified as necessary for national IHL committees and similar bodies to be able to discharge their role successfully.
In stock
CHF0.00

French English Arabic
Skip to the end of the images gallery 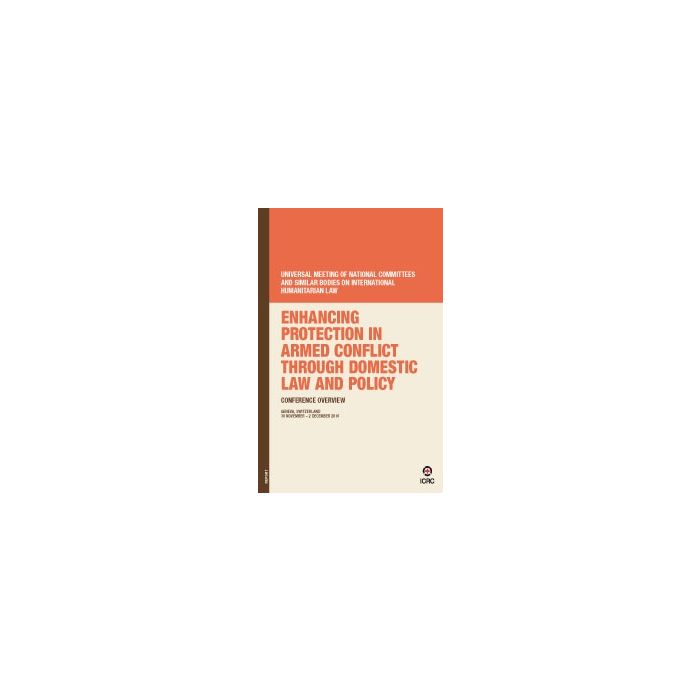